The Director of Transformation of the Ghana Police Service, Dr. Benjamin Agordzo has expressed concern with the election of Chief Sofo Azorka as a Vice Chairman of the opposition National Democratic Congress (NDC).

In a Facebook post, Dr Agordzo warned that the election of Sofo Azorka who’s the leader of pro NDC dreaded Vigilante group, Azorka Boys could make the fight against political vigilantism more difficult.

He reiterated calls for the amendment of the 1992 Constitution to free the Ghana Police Service of political control.

“So is it true that one of the leaders of a major Political Vigilante Group is now rewarded as one of the Vice Presidents of a major political party in Ghana? Hmnnn… How could the GPS deal with political vigilantes from such a party should they win power? The earlier Ghanaians woke up to this reality, the better for us. The problem, in my opinion, is not the political parties but the 1992 Constitution aspects of which we have failed to amend. Any party in power will take advantage of the Constitution which espouses Winner-takes-All concept to render the GPS impotent. No IGP can operate effectively under this kind of arrangement.This was exactly what I shared at IDEG insisting that so long as the police remain under the absolute control of winning political parties who metamorphose into the government of the day, the GPS can never deal effectively and decisively with political vigilantes…. It does not matter which party is in power… The solution lies in amending aspects of the constitution. We must amend the 1992 Constitution to empower the GPS to effectively perform its constitutionally mandated functions. Otherwise, I dare say we’ve not seen anything yet. We are sitting on a time-bomb because the motivation for joining armed rebel groups is not different from the motivation for joining political vigilante groups” 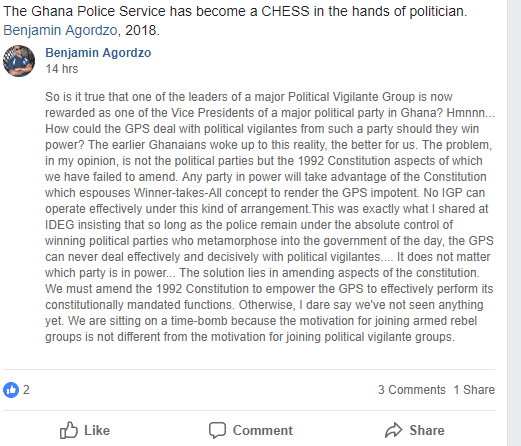