Deported Adoboli welcomed by his family in Ghana

Posted by: News in News November 16, 2018 Comments Off on Deported Adoboli welcomed by his family in Ghana 54 Views

Convicted former UBS trader Kweku Adoboli who was deported to Ghana from the UK on Thursday after Home Office officials put him on a flight from Heathrow airport arrived in his homeland to a rousing welcome by his family members.

Adoboli, who made global headlines after he was jailed for seven years in 2012 after being found guilty of fraud that cost UBS $2.3bn (£1.8bn) on his arrival in Ghana, was served with a bowl of sumptuous Fufu and light soup by his relatives to ‘settle’ him down after his predicament.

He who was arrested in Glasgow on Monday when he went to report to the Home Office, was taken to Harmondsworth immigration removal centre on Monday.

Adoboli, was not informed about when and how he would be deported but on Wednesday afternoon he was taken by five escorts to Heathrow airport and was due to be put on a flight at about 5pm to be returned to Ghana, where he has not lived since the age of four.

The deportation comes after a long battle by Adoboli, his lawyers and a large and diverse group of supporters, to try to keep him in the UK. 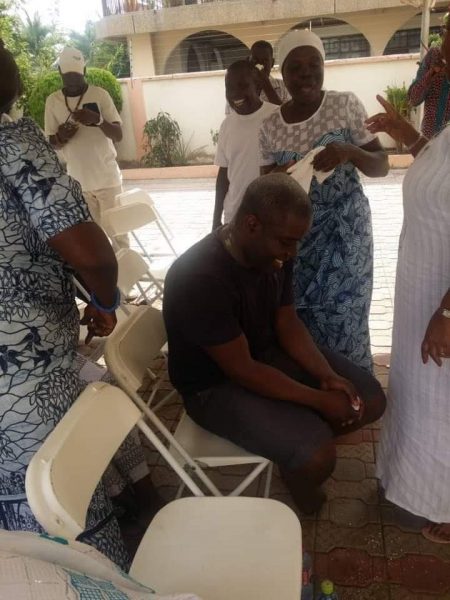 Speaking to the Guardian on his way to the airport Adoboli, 38, vowed to continue his fight from Ghana to be allowed to live in the UK.

He has called on the Home Office to implement a key recommendation in a report this summer from Stephen Shaw that foreign national offenders who have lived in the UK since childhood should not be deported.

Adoboli came to the UK at the age of 12 and attended school and university here.

“This Home Office policy to deport people who have been here since childhood is destroying the fabric of our society,” he said.

Adoboli has received unprecedented levels of support from 138 MPs and MSPs.

But in a letter to Adoboli’s MP, Hannah Bardell, on Wednesday, Sajid Javid said that the Home Office had considered the individual circumstances of his case and decided that it did not meet any of the exceptions specified in legislation that could lead to halting the deportation and that the Home Office’s decision had been upheld by the courts.

In his letter, Javid said: “The public expects robust action to be taken against foreign nationals who abuse our hospitality by committing crime.”

Adoboli, 38, lost his most recent legal challenge when he sought permission in the immigration court for a judicial review of the refusal of his latest application to remain in the UK. This was not granted.