Posted by: nfm in Business, News February 16, 2019 Comments Off on 10yr-UNIPASS deal approved by Cabinet 45 Views

Cabinet has approved for implementation, a new single window trade facilitation tool which is expected to boost port operations and enhance the paperless system including raking in more revenue for the county.

The transition process of the UNIPASS system, which was originally scheduled to start on January 2019, was suspended by the economic management team (EMT) due to challenges in phasing out the old system for the UNIPASS technology.

It was gathered that before the contract was approved, a six-month feasibility study was conducted by CUPIA in 2015 with a report on the “Modernization of Ghana Customs” using the UNIPASS system being produced and presented to the government.

In the process, however, training was provided to some senior customs officials in Korea on the UNIPASS system before a green light was given for the project.

Ghana link with its overseas partners, CUPIA Korea Customs Service will provide the trade facilitation and Customs Management System at a 0.75 per cent fee (FOB) per their contract with the Ministry of Trade.

The figure, according to industry experts I way cheaper than what the existing three vendors, external verification, west blue GCNet are currently receiving as a fee.

Currently, West Blue consulting earns 0.28 CIF which is equal to 0.32 FOB, external verification earns 0.1 CIF-equivalent of 0.16 FoB, whilst GCNet earns 0.40 FoB providing single window operations in Ghana together and they are taking 0.84 FoB which is way above government 0.9FoB.

On August 4, 2015, West Blue entered into an agreement with the government to provide a single window government as part of efforts to integrate the systems of service providers at the country’s ports and facilitate the clearing of goods without voluminous paperwork and reduce transactional time.

The contract was to expire on December 31, 2018, after which WestBlue would hand over the system to the government of Ghana which they reportedly have done.

In March 2018, however, the government of Ghana through the MOTI signed a 10-year sole-sourced contract with Ghana link Network Services Ltd For the “implementation system” for Ghana.

The UNIPASS system is currently being used in several other countries including South Korea. It is well acknowledged by the WTO, WCO, WORLD Bank, amongst others; as one of the best Customs Systems in the world. 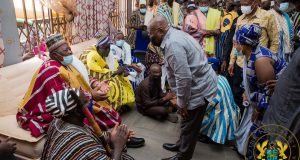 The General Secretary of the NDC, Johnson Asiedu Nketiah says the Chief Justice is going ...