Posted by: News in News November 9, 2018 Comments Off on Adenta Highway deaths: Gov’t to start work on footbridges next week 69 Views

The Inter-Ministerial Committee on Roads & Highways, Transport and Interior has said work on the abandoned footbridges on the Adentan-Madina Highway will start in the coming week.

This was contained in a joint statement signed by three sector Ministers following the death of a female student of West African Secondary School who was crashed by a speeding car on Thursday, sparked outrage by residents who blocked the main road burning car tyres.

“Alarmed as the General Public has been on this matter, The Ministries and Agencies have been working in recent weeks to complete the procurement processes and resume work on the bridges.“Work on the uncompleted bridges is expected to commence within a week. Work is to be down on an accelerated basis with multiple contractors to ensure quick completion” the statement said.

The residents were planning to hit the streets over six unfinished footbridges on the Madina/Adenta/Aburi highway on November 12, 2018, when the female student got crushed by a speeding car.

The deceased is reported to be the 195th person to die on the Madina-Adentan Highway in 2018 alone.

She was a first-year female student of the West Africa Senior High School (WASS) who’s said to be on the second batch of SHS students known as the Gold track and had gone to register ahead of academic work to begin, but was sadly crashed to death by a taxi driver. 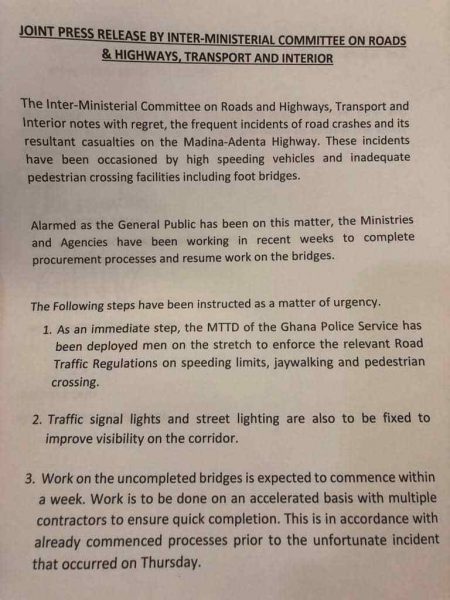