Posted by: News in News November 23, 2018 Comments Off on GES dismisses 10 for sexual misconduct, stealing and defilement 75 Views

Ten staff of the Ghana Education Service (GES) have had their appointments terminated by Service for committing various offenses which is against Code of Professional Conduct of the GES.

Out of the ten, six were dismissed over sexual and or immoral misconduct.

Three out of the ten were also dismissed after being convicted of stealing by the court.

One other person, Mr. Wayuga Mumuni, United Basic School, Tumu, Upper West Region, has also received his marching orders from the GES after being convicted of defilement.

A statement dated November 22, 2018 and signed by Cassandra Twum Ampofo, Head, Public Relations Unit, GES, said the decision to dismiss the ten was taken after they went through due process at all levels from the school through to the GES Council.

“This is to serve as a deterrent to others who have the intention of doing similar things”, the statement in part read. 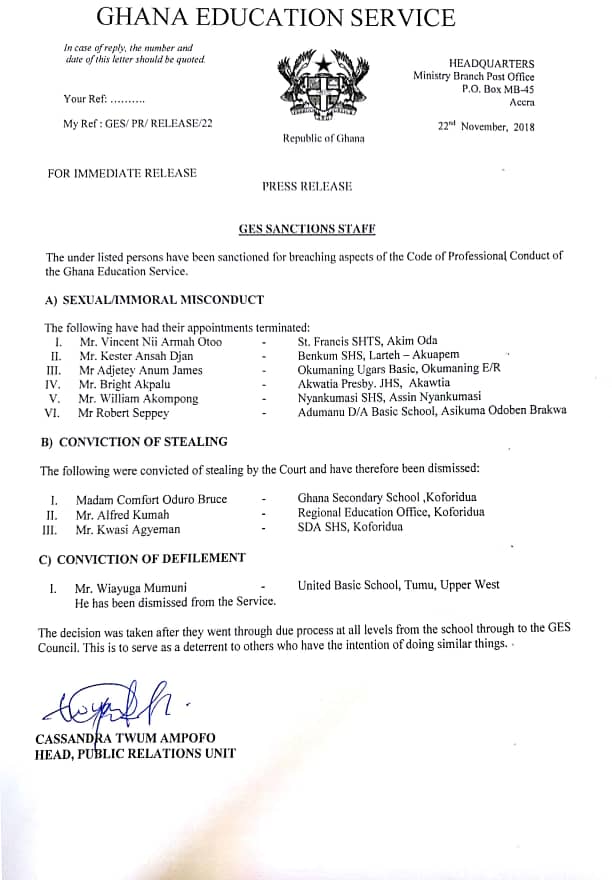 The Minority in Parliament has demanded an enquiry into the tragic news of an explosion ...