Former President John Dramani Mahama has admonished President Akufo Addo to heed to the good advice of Presidential aspirants and incorporate their views in the governance of the country as they are also ‘citizens and not spectators”.

President Akufo-Addo recently said he will restrain himself from reacting to the barrage of criticisms against his government by former President John Dramani Mahama as the latter is not yet the candidate for the biggest opposition NDC.

“Let me state here and now, for the record,that President Akufo-Addo will not respond to presidential aspirants.He  will respond to Presidential candidates that have been duly elected by their parties.” Mr Akufo-Addo  said on Saturday at the University of Development, Tamale. 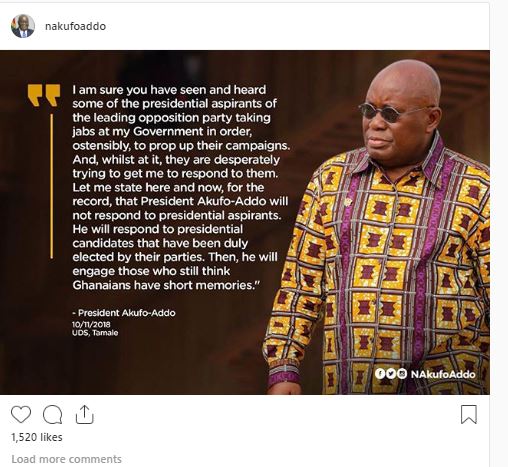 But addressing NDC delegates at its 9th National Congress at the Trade Fair Centre in Accra on Saturday, ex President Mahama stated that President Akufo Addo can decide not to respond to aspirants at his own peril.

Recently, in a barb aimed at my fellow aspirants and I, the President is quoted as saying he does not respond to Presidential aspirants. What I wish to remind Mr President is that us presidential aspirants are also citizens we’re not spectators and we are only amplifying the voices of our fellow citizens. Mr President can choose not to listen or respond to us but eventually the citizens of Ghana will demand that response and exact a verdict on the issues that we’ve kept raising.”