Posted by: nfm in Business November 17, 2020 Comments Off on Ho: Two officials of PBay nabbed 36 Views

Officials of the National Security in Ho have arrested two persons believed to be officials of a financial company, PBay, for allegedly attempting to defraud customers of some collapsed banks.

The two, one of whom has been identified as Charles Nyame, on Friday 13th November, gathered more than 700 customers of Gold Coast Securities and Blackshield from across the Volta region at the premises of the Assemblies of God in Ho-Ahoe, where they issued forms of agreement to be sealed by the affected customers.

The move according to them is to facilitate the payment of locked-up funds to the customers. 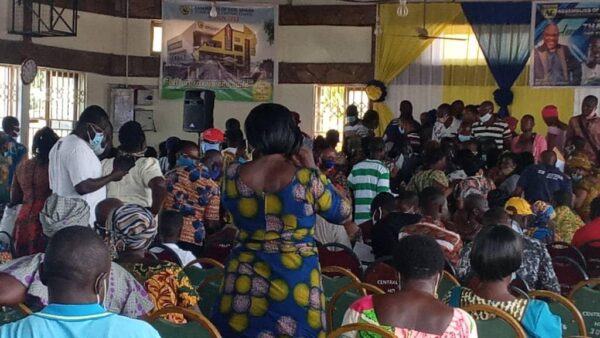 Portions of the agreement say in their efforts to retrieve the monies, “two percent of each investment account should be directly debited in favour of PBay limited.”

The Securities Exchange Commission had recently cautioned the affected customers against the payment of facilitation fees for the retrieval of their monies.

In a statement issued on November 7, the Commission noted that “The attention of the Commission has been drawn to the activities of PBAY Limited, an entity purporting to be able to facilitate the payment of customers locked-up funds with some SEC-regulated market operators, whose licenses have been revoked in return for fees or a commission. Our investigations have revealed that there is no company duly registered by the Registrar-General’s Department under that name.”

Furthermore, the general public and investors are to note that neither the SEC nor the Official Liquidator, being the Registrar General, have authorized the actions of PBAY Limited,” the statement added.

The Commission further warned the public to submit documents only to ‘publicly announced and designated persons.’

“The SEC by this notice wishes to warn the general public and advise investors to submit their claims and supporting documentation only to publicly announced and designated persons in accordance with statutory notices issued or published by the Official Liquidator or the Securities and Exchange Commission. Anyone who disregards this warning does so at his or her own risk.”

Revenue Collection: “Demons and principalities” will be eliminated – Bawumia