John Mahama was born on November 29th, 1958 in Damango, capital of West Gonja District, to an affluent teacher, rice farmer and politician. His father, Emmanuel Adama Mahama, was the first member of Parliament for West Gonja and the first Regional Minister of Northern Region, serving under Ghana’s first President, Osagyefo Kwame Nkrumah.

There has been an outpouring of best wishes for the former leader as he celebrates his birthday today. 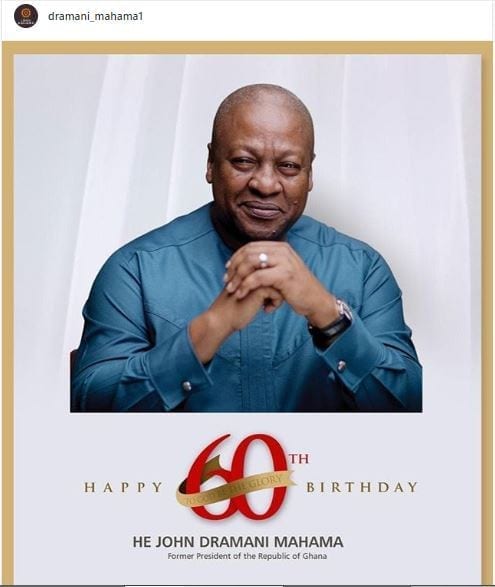 “I have the pleasure of celebrating the immediate past President of Ghana, John Dramani Mahama, a man who has demonstrated beyond any doubt that not all African leaders are clueless, incompetent or visionless,” Popular Nigerian journalist/publisher, businessman, and CEO and publisher of Ovation International,Chief Dele Momodu wrote in an article in honour of Mr Mahama on social media hours ago.

A former Minister for Gender, Children and Social Protection under the esrtwhile Mahama government, Nana Oye Lithur also celebrated her boss as he marks his 60th Birthday today.

“You have spent six fulfilling decades on this earth. We thank God for your life, JDM. The best decade of your life has been ushered in from today. Ghana is blessed to have you as a son of its soil. Your humility, love for your country, kith and kin conquers all. Stride on boldly into your sixth decade. Grace, Honour and Thanksgiving is your portion, Sir. Happy birthday!!!”

The consummate politician has served at all levels of political office in Ghana – Ghanaian and Pan-African Member of Parliament, Deputy Minister, Minister, Vice-President and President).