The Minister for Trade and Industry, Alan Kwadwo Kyerematen, says contrary to claims by some members of the opposition, the Akosombo Textiles Ltd (ATL), has been revived at the behest of the President of  Akufo-Addo.

With ATL able to employ some 3,500 workers when operating at full capacity, Alan Kyerematen indicated that after the New Patriotic Party government left office in 2008, “this company was literally brought to its knees”, with the factory producing at less than 30% capacity.

“By the time that we took over, the management of ATL had already decided that enough was enough, and that it was time for them, with all the investments that they had made, to say goodbye,” he said.

The Trade Minister continued, “It took the courage of His Excellency the President to decide that ATL will continue. He marshaled all the arguments that he could, even amongst us his colleagues, to defend the point that it was important to save this company.

“And, that is why you will recall that Government had to intervene to save this company, and in addition to that, has been able to attract private sector investments to be able to ensure that this particular company will go to the point where it started from.”

Alan Kyerematen made this known on Thursday, 22nd November, 2018, when President Akufo-Addo paid a brief visit to the Akosombo Textiles Limited on day 1 of his 3-day tour of the Eastern Region.

The Trade Minister revealed further that the Akufo-Addo government has decided to introduce a number of policy measures to deal with the challenges of the textile industry as a whole.

These policies include the introduction of tax stamps, and the designation of a single import corridor, “so you cannot bring textiles into this country except through that designated corridor, which is through Tema.”

Alan Kyerematen bemoaned a situation in 2016 where, even though we 30 million yards of textile print was imported into this country, only one container was declared through the Tema Harbour.

“It means that the rest were being smuggled in through the Eastern Corridor, so we can no longer tolerate this and that is why we are putting in a dedicated entry point. If you are a genuine importer and you want to import textile print, why do you want to import it through Lomé, when it is coming to Ghana and we have a port in Tema? It will come through Tema and we have a port to check those that are pirated and those that are not pirated,” he added.

Additionally, the Minister for Trade indicated that Government is providing stimulus packages and other support to the textile companies, and will also put in place a textile management import system “so that those who are importing and are not declaring what they are importing will have this control management system where imports of textile prints will be managed centrally. Then we can check these pirated goods.”

Alan Kyerematen indicated further that President Akufo-Addo “has directed that we must take steps to be able to encourage those factories outside, particularly in China to relocate to Ghana. I am pleased to report that by the 1st week of December, the partners working together with Ghana have invited some of these manufacturers to come so that we can start discussing the way forward.”

In concluding, Alan Kyerematen was convinced that with all these policy measures in place and with the President’s commitment and support, all the challenges of the textile industry will be a thing of the past.

“However, we would also ensure that we have a task force who will then ensure that we all comply with all these policy measures, so I want you to have confidence in His Excellency the President and the NPP government that your future is bright,” the Trade Minister assured.

Previous: Late Kyeremateng Agyarko’s family reveals the cause of his death
Next: Use your Powers to decongest prisons – Justice for all Judge to Akufo-Addo 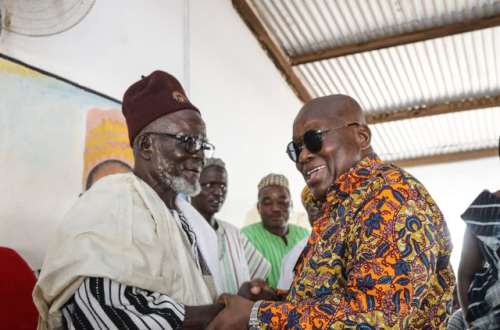