Former Chairperson of the Electoral Commission, Mrs Charlotte Osei has dismissed reports that she’s lacing her boots to contest for the vacant Ayawaso West Wuogon Parliamentary seat on the ticket of the opposition National Democratic Congress (NDC).

Some campaign posters of Charlotte Osei designed in NDC colours and with the logo are circulating widely on social media but she insists they’re fake and must be treated with the contempt that it deserves.

In an Instagram post on Wednesday, the former EC Boss said,  “I am not and have never been a registered member of any political party in Ghana or anywhere in the world”.

She further stated that she did not reside in Ayawaso West Wuogon which disqualifies her from contesting to be MP in that constituency.

“I have no interest whatsoever in running for Parliament and have never had that interest. Please, find better use of your artistic talent than mischief-making.” 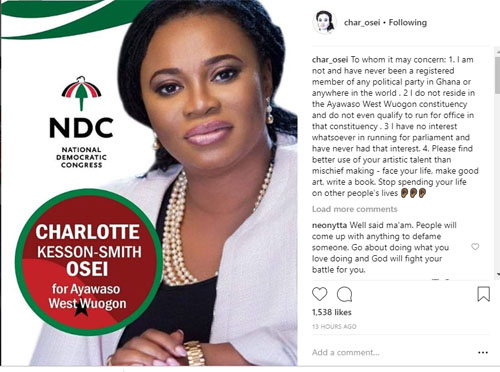 The Ayawaso West Wuogon seat is up for grabs following the death of Emmanuel Kyeremanteng Agyarko who was the MP. He died in November in the United States after an illness.

The past few days have seen jostling for a successor of the MP especially among members of the ruling New Patriotic Party (NPP).