Posted by: nfm in Politics September 16, 2020 Comments Off on Be vigilant against vain promises – Naana Jane tells voters 74 Views

Professor Naana Jane Opoku-Agyemang, Vice Presidential Candidate of the National Democratic Congress (NDC) has urged the electorate to be vigilant against vain campaign promises by politicians.

“Do not let anyone deceive you with sweet promises,” she said.

Addressing hundreds of residents of the mining town of Prestea in the Western Region on Tuesday, the Running Mate asked the electorate to check the track record of the parties on fulfilled promised. 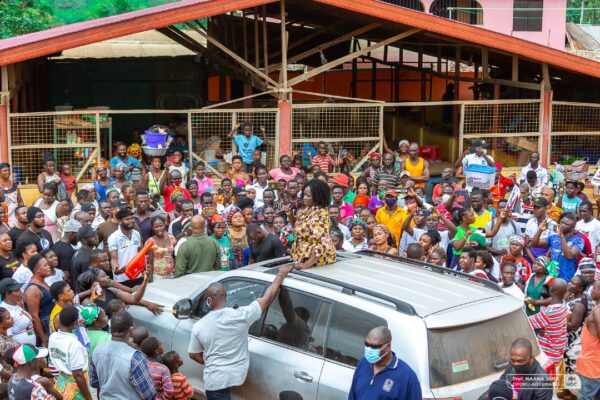 According to her, the NDC would continue to be sincere with Ghanaians, adding that the party’s manifesto represents what the people want.

“We are not like others who fail in delivering on their sweet promises. You know that when we promise, we deliver,” she said, amidst loud cheers from the crowd.

Calling for the mandate of the people to enable the NDC to return to power to rejuvenate national development, the Running Mate noted that the NDC remains the most credible party to lead the country into sustainable progress.

Prof Opoku-Agyemang earlier called on the chief of Prestea Hemang, Nana Nteboa Pra IV, where she explained the various sections of the party’s manifesto relating to socio-economic activities in the area, including small scale mining.

In the quest to equip the youth with the requisite technical skills in mining, she said the NDC government would prioritise technical education in mining areas to support the youth.

In addition, she said the NDC government would facilitate the establishment of gold refineries in mining areas to ensure that small scale miners benefit more from their mining activities.

“You have been cheated for long because you don’t have refineries here to trade your minerals in a more profitable manner,” she said.

Hearing of the Review Application filed by embattled Member of Parliament (MP) for Assin North ...