Posted by: News in News November 28, 2018 Comments Off on Focus on locally manufactured guns – Akufo-Addo to Small Arms Commission 67 Views

President  Akufo-Addo has charged the National Commission on Small Arms and Light Weapons to focus  attention not only on weapons coming into the country through its boarders, but on the proliferation of weapons in the country that are manufactured locally.

Addressing the Board Chairman and Members of the Board of the National Commission on Small Arms and Light Weapons at the Jubilee House when they paid a courtesy call on him, the President cautioned the body to pay sufficient attention to the domestic manufacturers of small arms.

“There is an aspect of the management of small arms that we don’t seem to pay sufficient attention to and that is the domestic manufacturing of arms” the President said. “The tendency to think that all the arms that are on proliferation in our country are smuggled in or brought in from across the boarders in high. In fact our own domestic facilities for manufacturing are not very sophisticated but they exist and they are part of the security architect of our country. We don’t seem to have enough focus on them and the measures that we need to take to control their proliferation, existence and manner in which they work to produce locally made arms. It has to be very much part of your mandate” the President said to the board members.

The President called for collaboration between the commission and central government in order publicize and bring as much attention to the Ghanaian society as much as possible on locally made arms so that there can be some control on those engaged in the industry of manufacturing local arms.

Board Chairman of the National Commission on Small Arms and Light Weapons, Rev. Dr. Frimpong Manso, in his address said the Commission has put in place programmes to prevent, combat and eliminate the proliferation of illicit small arms and light weapons and ensure Ghana’s compliance with obligations under the ECOWAS Convention is SALW and any other international instruments on small arms and light weapons that Ghana is a state party or has acceded to.

Gaps in the Law

In his remarks, Rev. Frimpong Manso observed that it is time to review the current Arms Control legislation. He said the Commission is currently taking steps in that direction and will in due course present a draft Bill on Arms and Ammunition through the Minister for the Interior to Cabinet for consideration. The Bill he indicated will seek to close the gaps in the country’s Arms and Ammunition control. He beseech the President to give the Bill all the needed attention when it gets to his desk.

Dr. Frimpong Manso, also highlighted three issues that he said needs urgent attention to make the work of the commission smoother than it is now. A suitable office accommodation, Financial and logistical support to be able to open regional offices of the commission in all ten regions of the country and a plea to prioritize the Small Arms Commission’s work in the President’s interactions with external donors constituted the three issues of concern.

Members of the Commission

The others are the Volta Regional Director of 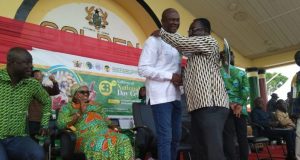 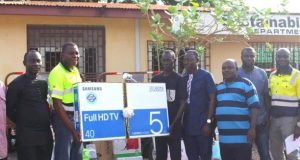